Who doesn't love a soft fluffy cinnamon roll?  I use my grilled pizza dough  recipe as a starter.  Did she just say, "pizza dough?"  Yes, yes I did!  It's the same exact dough!  I use pure maple syrup and no butter in the center of these delicious rolls.  It's a nice flavor change and I am sure there are some calories saved. 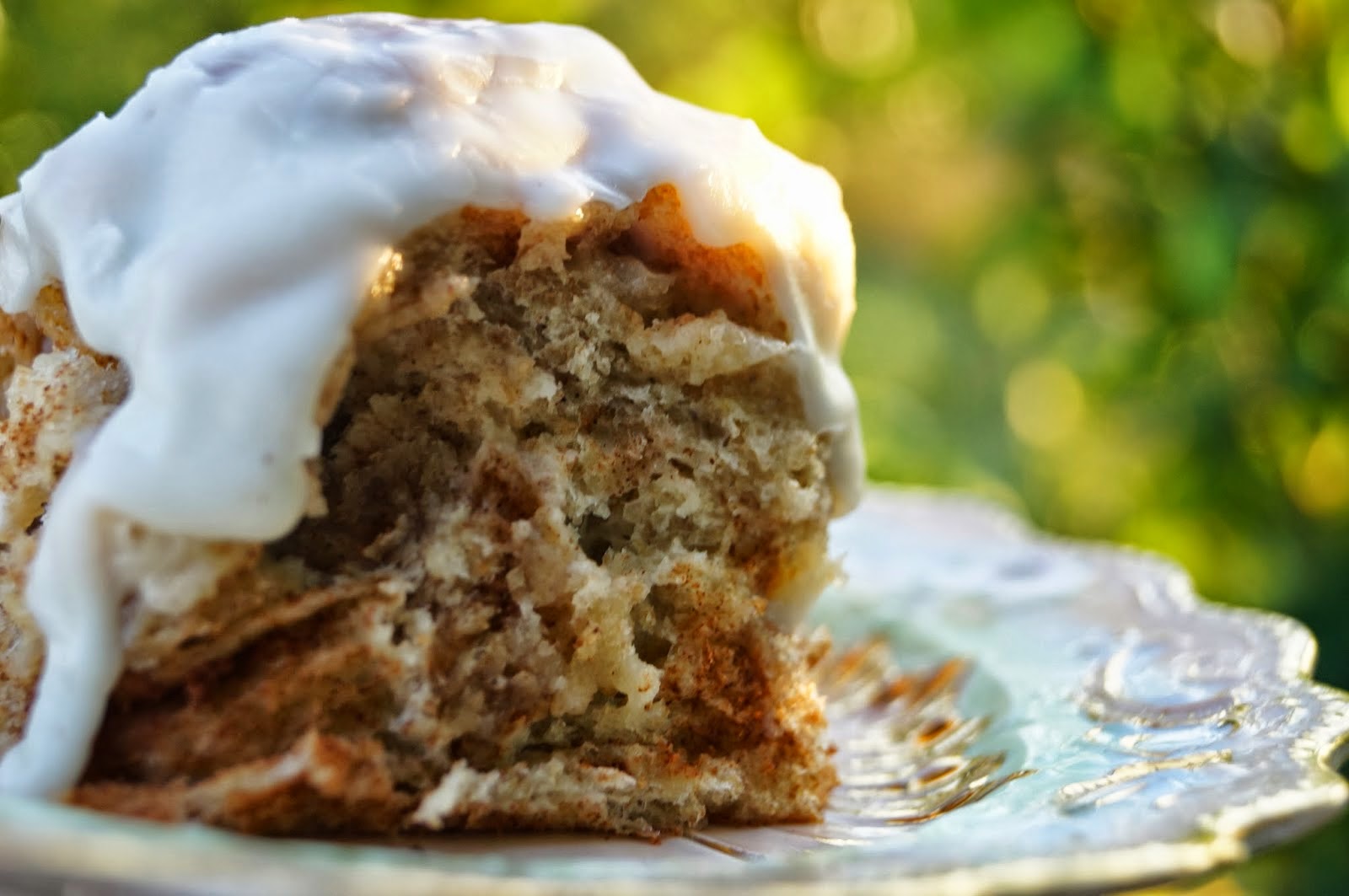 favorite frosting recipe (mine has butter, powdered sugar, vanilla, and milk or you can use cooled coffee and I don't measure anything when I make it for rolls) 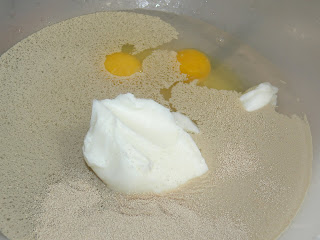 Mix with whisk until shortening is pulverized. 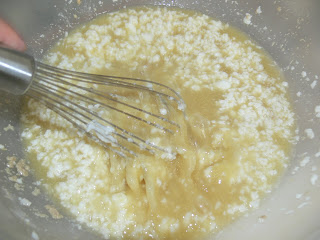 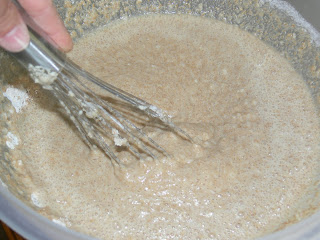 Add rest of flour and mix. You will have "Hulk" fingers but soon it will.... 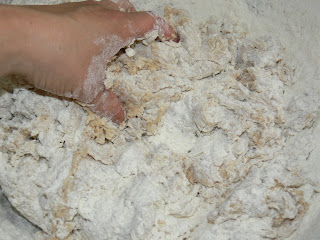 all blend into a nice ball with a little bit of kneading. You can also use your mixer if it has a dough hook. Place in greased bowl and cover. 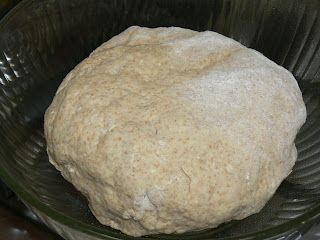 Let rise for one hour. It will almost double in size. 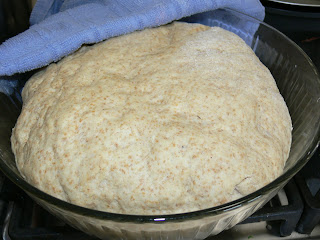 Cut dough in half.  On large floured area roll out to 24" long and about 15" or so inches wide. 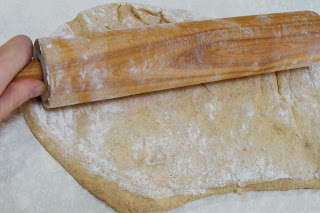 Drizzle on half of the maple syrup. 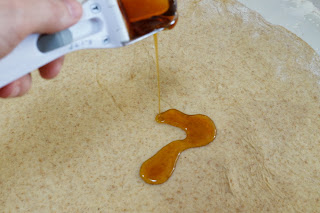 Sprinkle on some cinnamon.  Use as much as you like.  They are called CINNAMON rolls, right?! 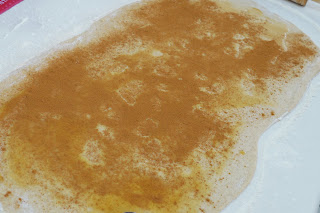 Using a sieve, sprinkle on half of the cornstarch.  You don't have to use a sieve but it will go on a little more evenly. The cornstarch will help thicken the syrup so it doesn't all run out when it is baking. 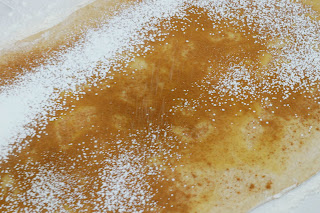 Using a spoon, mix it all together and spread all over but not quite to edge on the far side. 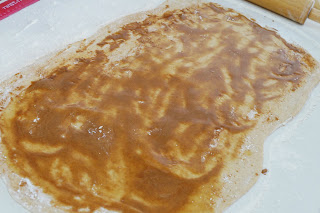 If you are adding nuts, sprinkle them on now. 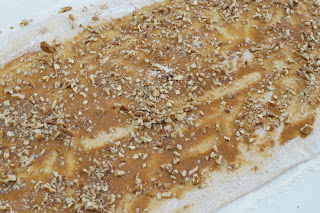 Roll it up. As you roll, since this is a stretchy soft dough, you can pull on it a little bit.  This will help you get many rings in your cinnamon roll and keep your rolls tight.  When you get to the edge pinch it shut. It will be longer than the 24" you need but that is OK.  I'll tell you what to do with the extra. 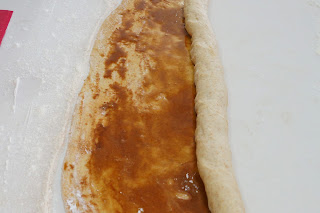 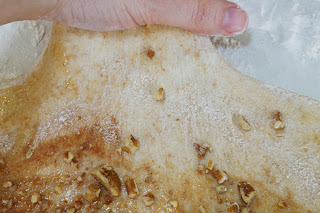 Now you are ready to cut your cinnamon rolls.  I found the center and started from there.  That way I had nice pieces and only the ends would be odd shaped.  Using a piece of thread, scootch it under the dough, pull up, criss-cross, pull and it will cut your rolls without smashing them like a knife would.  Move over 2" and do the same.  You should have 12 nice pieces total.  6 on each side of center. When you get to the ends they will be a little thinner so you can go  a little shorter.  Since they aren't as nice you can either toss them or do what I did.  I put all these goodies in their own baking dish, baked them, and we ate them anyway! They still taste as good. 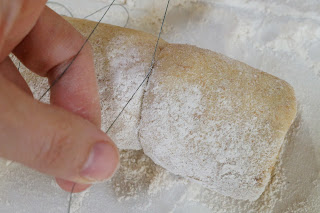 Stand the rolls face up on a greased baking dish/pan. I used a 9 x 13" pan and put 12 in each. I could have put them closer but I know these really expand and I wanted to let them have their full potential! Cover and let rise for 45 minutes.  Turn oven on to 350 degrees.  (Allowing them to rise while the oven preheats.) 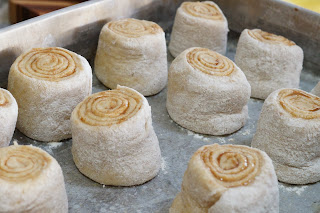 Bake for 20-25 minutes or until golden brown and only slightly give when you press on them. If they have a bit of flour on it you can use a pastry brush and dust them off or leave it and the frosting will cover it. 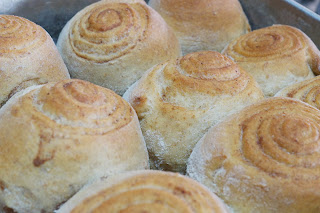 You can frost while warm and the frosting will run down the sides or wait until they are cool to frost.  Your choice! For the ones with pecans I sprinkled a few on top of the frosting so I knew which pan was which. 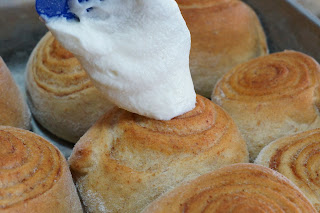 We love these fresh but if you are eating them another day you can pop them in the microwave to warm them up.  They'll taste like they are fresh out of the oven! 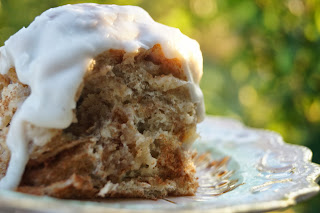