Europe: A Carousel of Flavors Part 3

We've arrived at the halfway point of my European trip.  I hope you have checked out Part 1 and Part 2.

This leg of the journey starts in the German part of Switzerland and then make our way to through the countryside of France on our way to Paris.

With this part of the trip comes a little family history from my husband's side.  We passed near where my husband's family is from, the Alsace region of France.  Many of the families from the small town I live in are from here.  My husband's grandfather arrived here in Iowa in 1905 at the age of 5.   The train he came in on at a tiny town near us, called Noble, used to run on the land just across the road from where I live now.  You can see some of the "hump" yet and bits of burnt coal here and there. I didn't get to meet anyone with our same last name but the folks at the hotel in Switzerland were familiar with it.  We've dropped the umlat (ä) over our a but the rest is the same.

Now on to the food and travel! 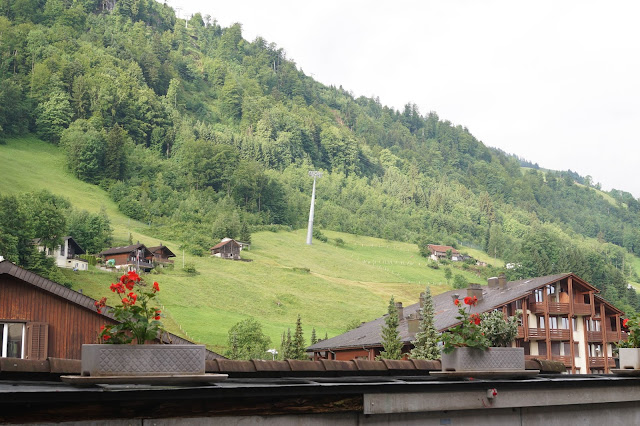 Hillside of Emmenten, Swtizerland.  This was the view outside my hotel balcony. You could hear the sheep and their bells.  Unfortunately I did not get a photo of them.


Europe:  A Carousel of Flavors Part 3

This day we ventured down into the city of Lucerne, Switzerland.  Our small group stopped by a grocery store that had a deli so Bert bought a bratwurst.  This one was closer to the bratwurst grind I was looking for.  I ate it plain but would have liked a stone ground mustard to go with it. 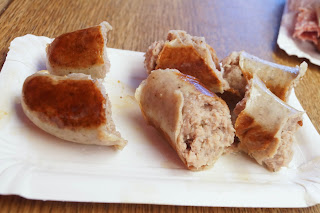 Meals are expensive here.  17.50 Francs for a salad and main dish.  3 Francs just for a glass of tap water. My salad was good.  She told me it was a French dressing but it was white.  It didn't taste like any American red French dressing I had ever had.  It was white with herbs, falling between a vinaigrette and ranch. I liked it. 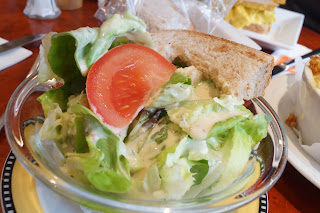 My main dish.  Älplermagronen - oh my - carb overload!  The bottom was layered with big chunks of cooked potato and then cooked pasta that was mixed with a white cheese sauce, Gruyere is what I see online when I do some searching but don't quote me on it.  Then it was topped with fried onion bits that reminded me of the Durkee onions you put on top of green bean casserole.  It would be what I would call a good comfort food and I couldn't finish it.  Too bad I had no way to keep the leftovers for another time.   A traditional way to eat it is with homemade applesauce. 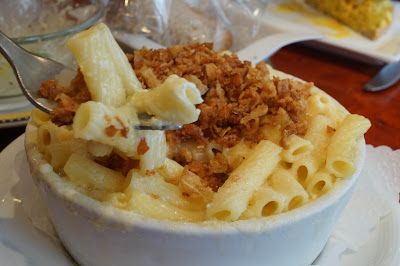 After a many mile walk around Lucerne, my co-travelers and I stopped at the fancy Grand Hotel National to have ice cream they are famous for.  It was the only thing we could afford.  Their rooms are $350 per night for their cheapest!  I had a coffee ice cream dessert with espresso, whipped cream and pirouettes.  This is my fellow traveler's 3 scoop dessert.  We splurged but it was well worth it and we had walked so much we could eat the calories without a worry. 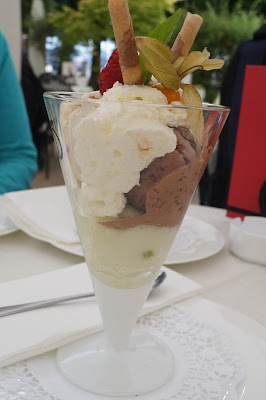 While we were eating our delicious ice cream we had an extra treat.  A table near us had a gathering of friends. They were having what looked liked appetizers and champagne.  I could see a sword sitting on the tabled and wondered.  Yes, I was right.  The waiter opened the bottle with the sword.  It was fun to watch.  I even managed to get a photo the cork flying through the air. The waiter was really nice and gave the top, wrapped up in the wire enclosure, to the student who had joined us. 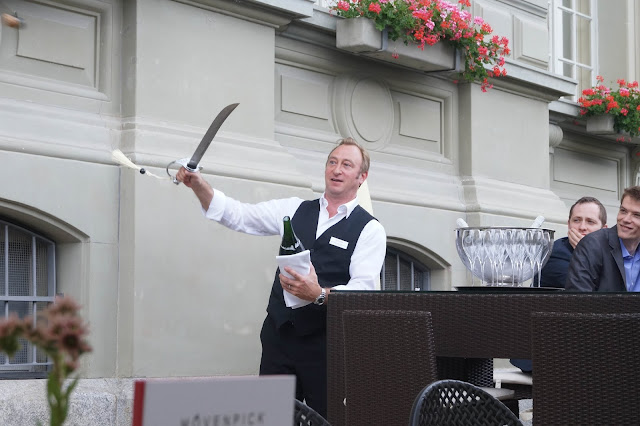 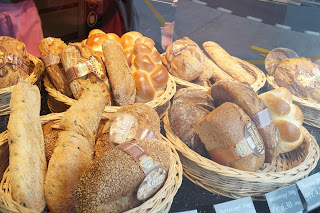 Cheeses too.  These were made from goat milk so of course they peaked my interest. 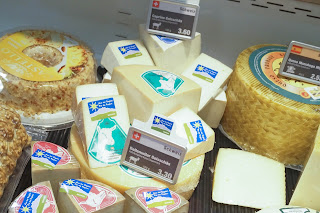 For supper that evening we ate at our hotel in Emmenten.  We had their version of Spaghetti Bolognese which was made with tiny pieces of beef and had no dairy, wine or garlic.  It was very delicious.  They again offered seconds but I was so full I couldn't or I would have been miserable.  I was quick to ask for the ingredients to this dish too and make it here at home. You can find my recipe HERE. 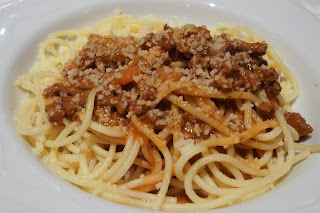 Our dessert was a vanilla ice cream and raspberry sorbet frozen slice.  They served with a little swirl of whipped cream. The sweet of the ice cream was a nice compliment to the semi-tart sorbet. 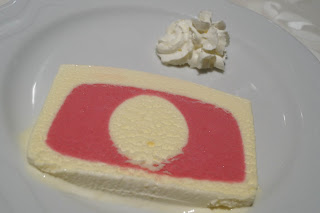 The bread at breakfast...I wanted to eat the whole loaf!  I love the diamond pattern it.  So pretty! 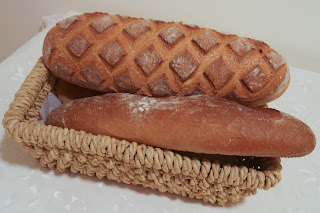 We left the Lucerne area of Swtizerland to head to France.  On the way we stopped in the town that originated the cuckoo clock in Germany.  It was my final chance to have a German meal.  I ordered schweineschnitzel wit pomme frites.  A pork schnitzel with french fries.  They served their schnitzel just as I would eat it at home, with a lemon slice to squeeze on it.  Nothing else. 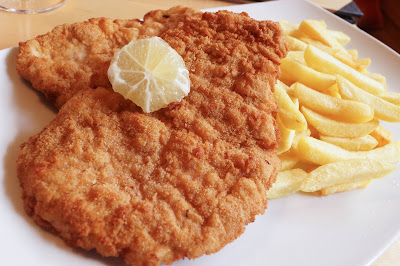 We soon made our way to Colmar, France.  A beautiful little town. 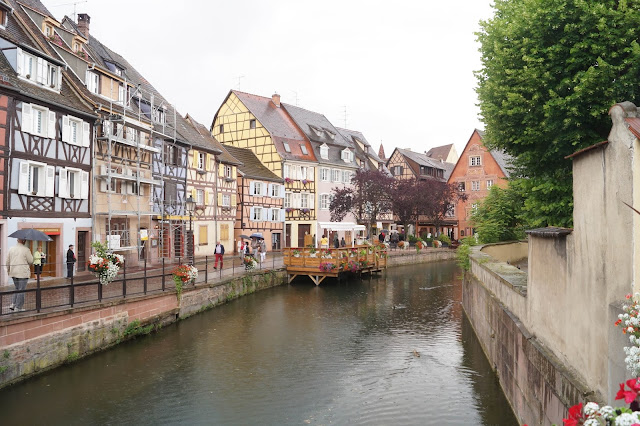 I had a petit pain au chocolat at a bakery.  Croissants with chocolate?  Yes, please!! 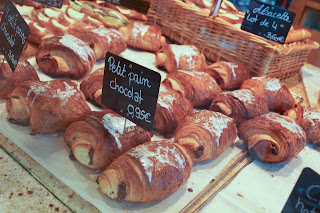 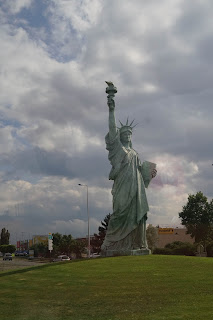 Our overnight stop that evening was Strasbourg, France in the Alsace region.  We had a dish I was somewhat familiar with .  They called it Beef Stew with Spaetzle but to me it was more like SAUERBRATEN but without the "sauer" (sour.)  The short spaetzle was lightly pan fried.  I think I could try that with our spaetzle if I cut it up a bit.  It definitely added to the flavor of the dish. 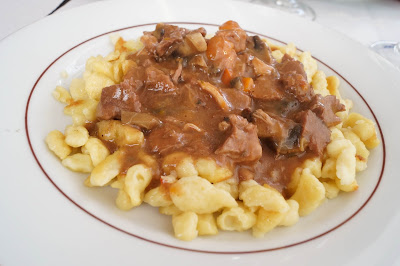 For dessert we had an apple tarte flambée. The chef told me the base had cream cheese in it but research on the internet shows it was probably crème fraîche.  The crust is similar to a thin crust pizza (but don't call it pizza!) with the toppings added and then it's brick oven cooked to get that bit of burntness. 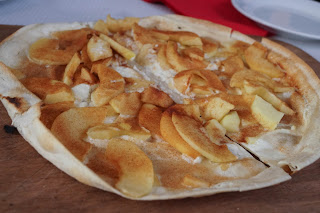 This breakfast followed suit to most of our other hotels. Meats and cheeses. 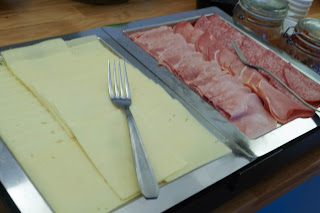 Breads, including those chocolate croissants in the basket. 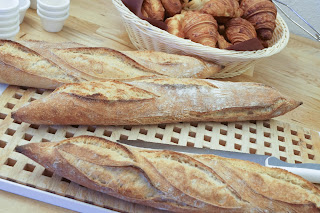 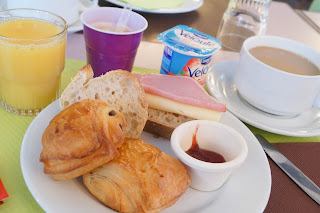 We've now left Strasbourg and are headed to Paris.  I grabbed a Madeleine to snack on.  I love the pretty shell shape. We arrived in Paris and said goodbye to our driver Jack.  After this we were on public transporation.  We made our way down to Notre Dame Cathedral.  The magnitude of this church and the architechture so detailed.  We were there to hear the bells ring too. 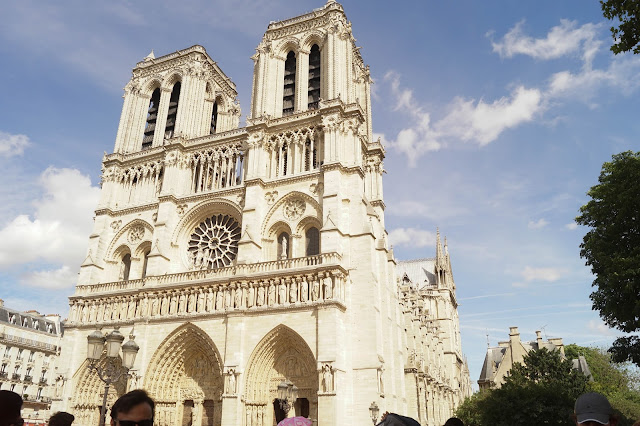 I strolled around a little and found a bakery with delicious treats. 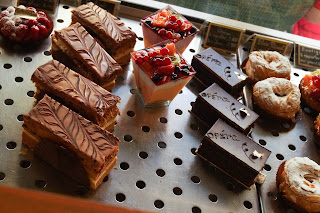 I bought a pralinée.  I saw later in searching that is is also called a millefeuille pralinee.  If my French class memory is correct that is a thousand paper praline.  Which makes sense with all it's layers.   Creamy, caramely moussey, crunchy, so good! 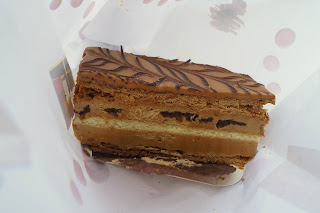 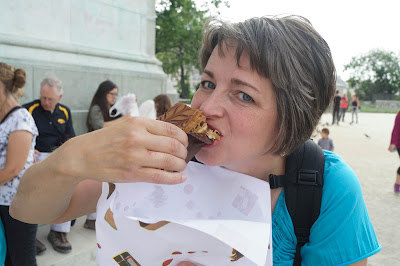 Stay tuned for Part Four of my trip to Europe!