Europe: A Carousel of Flavors Part 4

The 4th part of my journey is all Paris.  I shared a little bit in Part 3 but there was so much more to share from Paris I had to have one more post. Paris was beautiful and the architecture was fantastic! 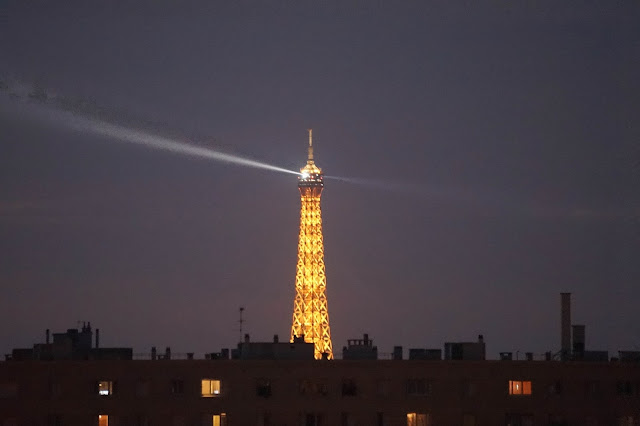 The view from my hotel room at night.  This was so neat to see!!

Tonight we have Flammekueche, served Alsacian style.  Do they look familiar?  We had this dish another night with apples on it.  That restaurant called them Tarte Flambée.  A very thin bread dough, a mixture of good homemade cheese and spices, sweetened with a touch of cream, and smoked bacon.  They were delivered, family style, whole on a slab of wood and then we cut them ourselves and dug in. 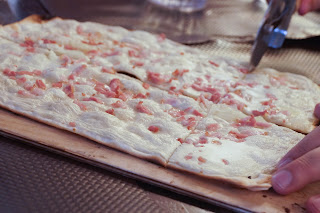 They cook it quickly in just 3 minutes.  The bottom of the crust gets nice and toasty, almost burnt but it adds a lot of character. 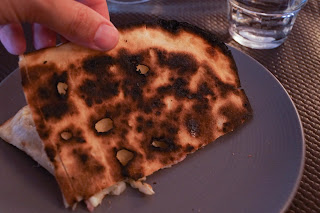 Tiny little sausage style meat with onions was next. 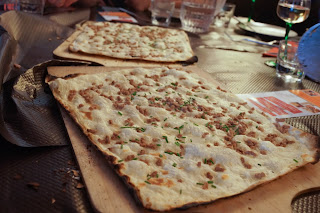 Dessert was an apple cinnamon flammekueche 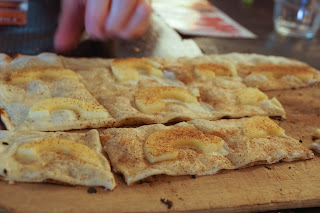 followed  by a chocolate one.  It wasn’t overly sweet and even though it looks like a lot of chocolate it was only a thin layer. 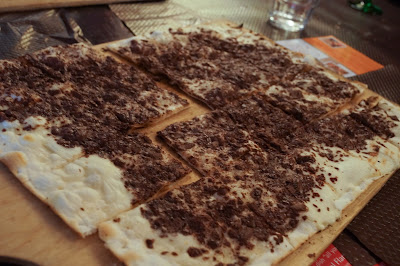 After supper wet got a pass to the top of Montparnasse Tower to the 56th floor for a bird's eye view of Paris.  Now you get the grand feel of the size of Notre Dame! 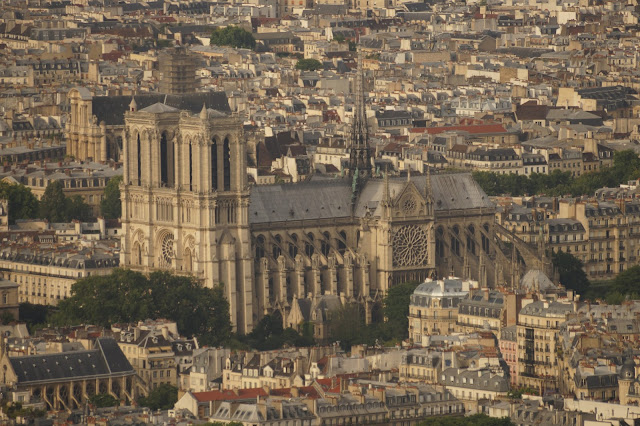 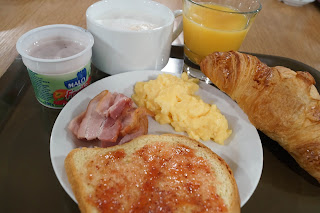 After breakfast we were off on a bus site seeing tour and a stop at the Tour de Eiffel.  To my surprise it is not black as I thought it was but more of a bronze color. 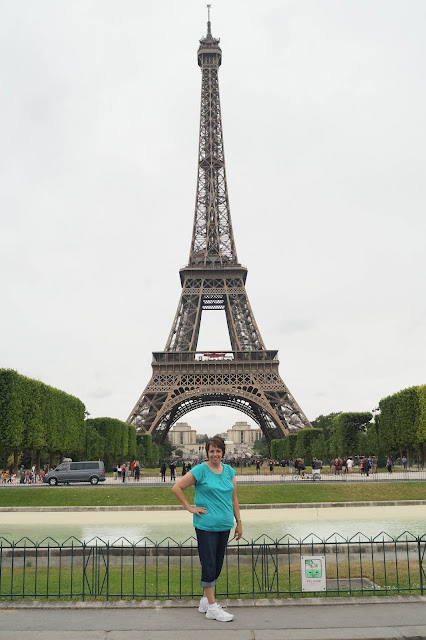 Our bus tour ended at the Arc de Triomphe. 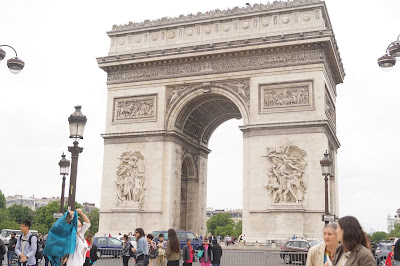 We were left on our own to explore Paris.  My traveling companions and I set off to walk the Champs-Élysées .

It was lunch time so we stopped at an outdoor café.   Again, to my delight we all ordered something different so we could try a bit of everyone else’s meal.

Wendy had a deep dish quiche Lorraine with side salad. 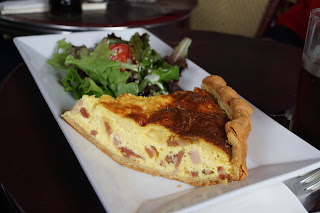 Her mom had a Croque Monsieur.  It’s what I call a fancy style grilled ham and cheese.  It starts with bread then ham, then bread and finally the cheese is layered on top to brown.  If you want a Croque Madam you have them add an egg. 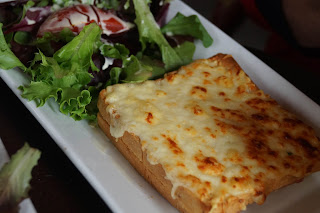 I ordered a beautiful pizza margherita.  Nothing but tomatoes and cheese on this but the simplicity of it was so good with the brick oven cooked crust.  It reminds me of my grilled pizza dough. 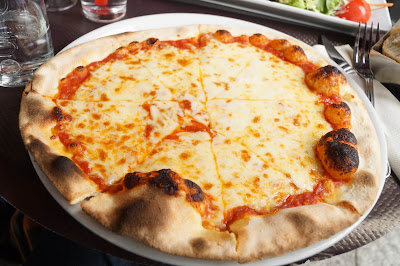 The pièce de résistance was my water.  I though you had to order water from them as it was on the menu so I did.  I opted for the cheaper water size, which was still 6 Euros for this little bottle.  Some of the other diners didn’t order a drink so the waiter brought them water in a little pitcher.  We joked that my water had better taste a lot better than their free water.  They had me try their water.  I must admit while it wasn’t terrible, my 6 Euro water was indeed better.  I made sure to drink every drop! 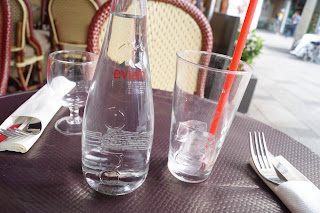 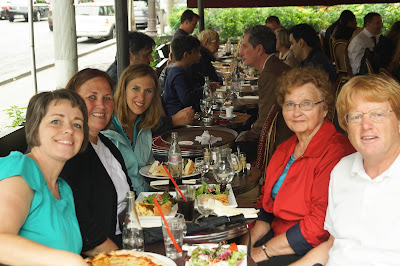 We took a leisurely stroll down to our meet up place at the museum.  Along the way I found these lovely crêpes .  They were the size of a platter, stuffed with your favorite flavors.   I chose a Nutella crêpe.  It was really sweet.  I think I would have been just as happy with half the amount of Nutella but it didn't slow me down at all. 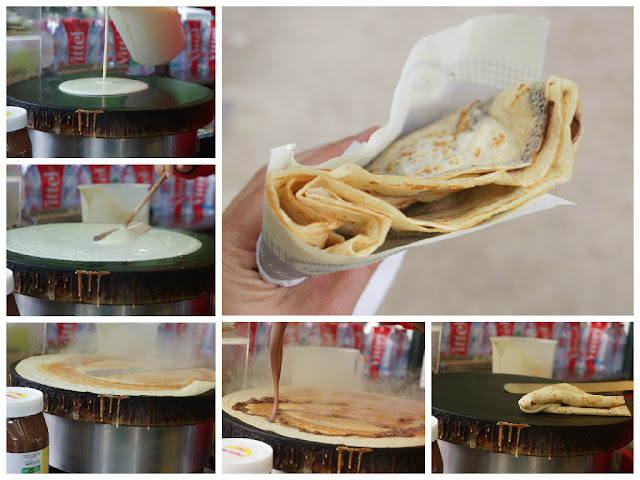 After a couple subway stops our tour guide brought us to our supper that evening.  Again our meal was simple and nothing over the top.  I was told it was Alsacian.  First we were served a salad.  It had corn in it.  The thought of corn in this type of salad was a little odd but it worked.  I liked the corn.  It would have been a lot better with fresh corn and not canned but it added some crunch.  They had a choice of ranch or honey mustard dressing and served it with bread. 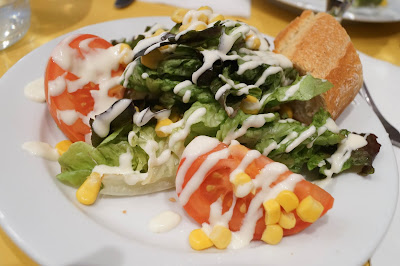 Our supper was a stew of hindquarter of a chicken with peppers, onions and tomatoes.  Served with a scoop of rice.  There wasn't much to it and it didn't have a lot of flavor. I'd definitely try it again with some more herbs. 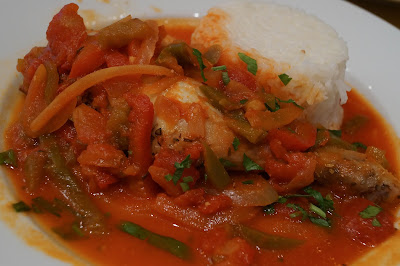 Dessert was an apple tarte, served cold if I remember right.  The restaurant was really crowded and I didn't have a place to write notes and by the time I got to our hotel I was to tired to write any. 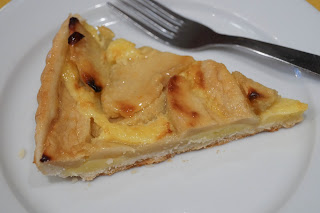 On the way back to the hotel, a couple travelers from Kansas and I stopped by a bar/cafe for a little bit.  They needed a little more sustenance than what their supper was and I wanted to hang out before heading to the hotel.   I had a cappuccino and the fella had a beer.  He tried a kind he hadn't tried yet and when he drank it he made a face.  I asked him if it was "that bad" and he said it was really sweet.  Hmmm, sounds interesting.  His wife tried it and agreed that it was sweet.  Not having had a beer since 1984 (and HATING it - haven't touched one since) I tried a little bit. It was pretty good.  I finished it off.  Our waitress didn't speak much English so I didn't ask her any questions and just wrote down the name of the drink. After researching the name I discovered why I liked it.  It was a beer cocktail of French beer and peach syrup!!  Its's called a demi-pêche.  I didn't feel much alcohol buzz from it but I am sure if you drank enough it would sneak up on you. 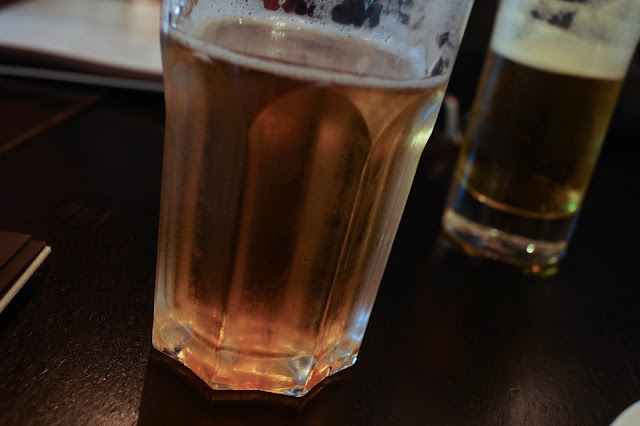