Europe: A Carousel of Flavors Part 5

It's time to share the last leg of the European tour I took this summer.  It was fast, busy, lots to see, lots to eat, many memories and a yearning to go back and spend more time in some of the places I liked the most. 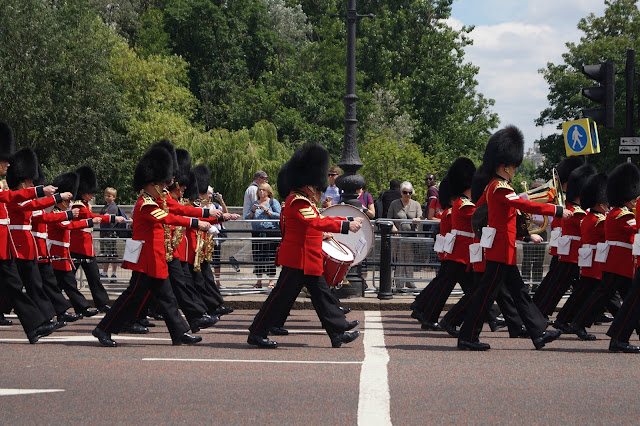 Changing of the Guard

A quick train ride and a turn back of the clock one hour and we arrived in London.  Yeah!  Everyone speaks English...booo....they drive on the "wrong" side of the road and now I really have to pay attention!! 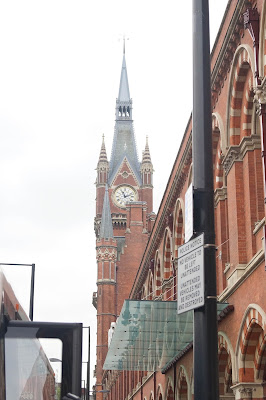 I liked this sign...not "Yield" but "Give Way" - it sounds so much more polite. 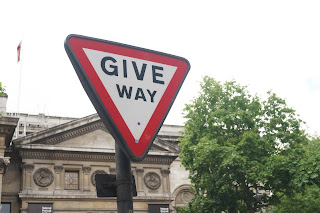 Doctor Who anyone?  These little gems were everywhere. I couldn't tell you the last time I saw one here in the United States. 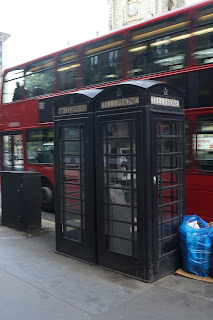 We toured around London past more guards, through museums and side streets. 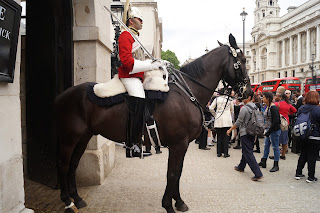 Stopping at a place that had a few street performers.  This quartet had beautiful music! 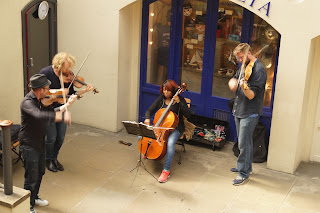 Supper this evening was at a restaurant called "The Fable."  Finally a place with some a/c and plenty of room to sit and be comfortable.  It also had some flavors I had never had before.  Our appetizer was fried calamari and fried tiny octopus with a spicy dipping sauce. The calamari did not have much flavor so I did eat them all.  I was told the octopus would be a bit rubbery with not much flavor either so I tried a nibble.  Indeed, not much flavor and rubbery. It tasted like I was chewing a fried rubber band.  But, now I can say I have eaten octopus! 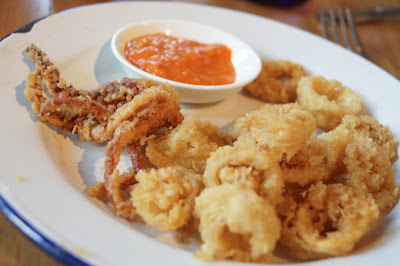 Our main entree was the traditional London fish and chips.   The white fish was so tender it fell apart in my mouth.  I am not a big fish eater but did eat half of it.  The fried-ness of it and the appetizer was too much for me.  I hadn't really had much fried foods in the past couple weeks and it was more than I wanted. 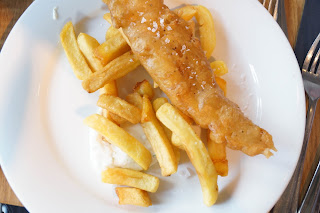 Breakfast here in London was again typical of what we've had in other cities here in Europe. Nutella, meats, breads, croissants, cappuccino, OJ and then also some mini chocolate chocolate chip muffins. They also had some Laughing Cow cheese that I didn't get a photo of and should have.  They were square.  The ones I have seen here come in wedge shapes. Maybe it was because they were for individual consumption and not sold as a pack. 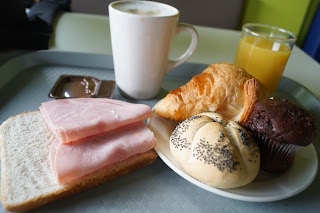 We grabbed a charter bus and were off to see the London sights.  A stop at Buckingham Palace just in time to see the changing of the guard (see photo at the top of this post.)  It was quite grand. 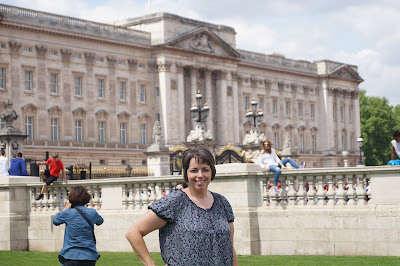 Part of our group went off to Windsor Castle.  So pretty and in great condition. The Queen was not there or Buckingham Palace on this day.  Our lunch today was quick and I had some creamy chicken soup and a roll. 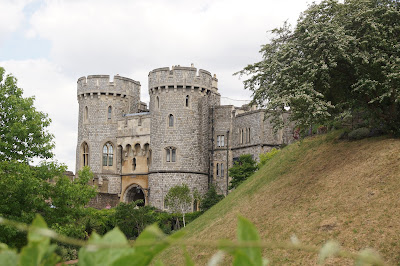 We met up for supper at "Wagamama" in London. It's a Japanese restaurant and after eating octopus the previous day I wasn't sure what we were going to get. This is Yaki Soba.  A soba noodle dish with chicken, eggs, onions, bean sprouts, peppers, fried shallots, pickled ginger and sesame seeds.  Did not care for the pink stuff plain...OMG....whew.....oy!! I pushed it aside, others stirred it in.  They served us with chopsticks and while I am not good at them.  I gave it the ol' Girl Scout try and ate all of this dish up until the last two bites with the chopsticks.  I used the spoons the provided for the rest. 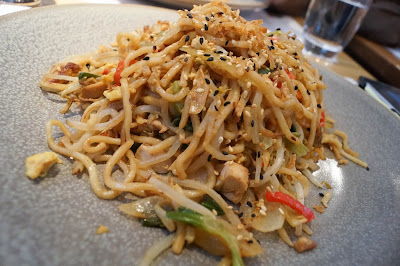 They whisked my plate and spoon off to the back and served a scoop of ice cream and a piece of cake.  No "real" silverware, just chopsticks left.  Not a fork in sight. So, I stabbed my cake with a chopstick.  That got a laugh out of us.  Then one lady asked me how I was going to eat the ice cream.  So, I stabbed it with a chopstick!  Problem solved!  A few of the students on the trip thought it was funny so they snapped a photo and one of them sent it to me.  If you are wondering, yes, I ate them both this way.  (The fork in the photo came after I already stabbed my dessert. ;) ) 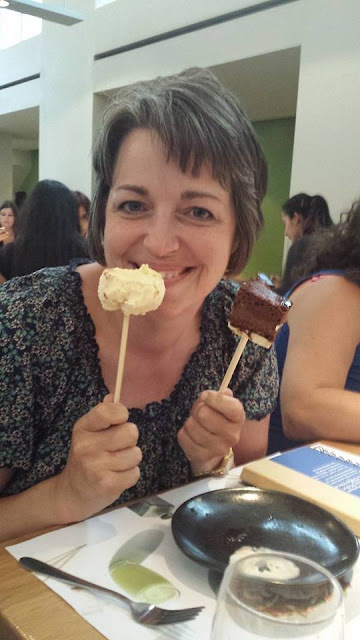 After supper we hopped on the tube to head to the show "Wicked."   It was my first live show and it was fabulous! 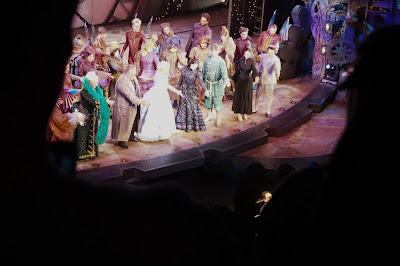 This morning we say good-bye to half of our group.  They aren't taking the last two days of the extended tour.

The rest of us are headed to the city of Bath.

No one is taking baths in this anymore in fact they warn against touching the water at all. 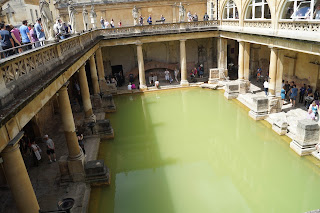 For lunch I opted for a pasty.  I chose a Veggie Goat Cheese Special.  It has goat cheese (of course,) tomatoes, potatoes, onions, sweet potatoes, mixed peppers, courgettes (which is what the English call zucchini,) mixed herbs, tomato puree and seasonings.  It was fantastic!  I need to some of these for sure! I also has a pastel de nata, which is like a little custard.  Mine was lemon flavored.  Just the right size. 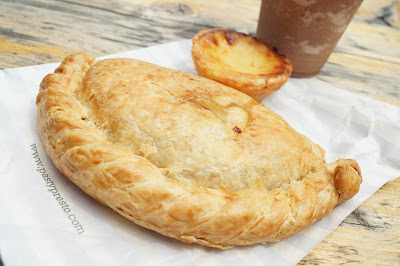 After our time in the City of Bath we journeyed to Stone Henge.  As you can see it was a gorgeous day. 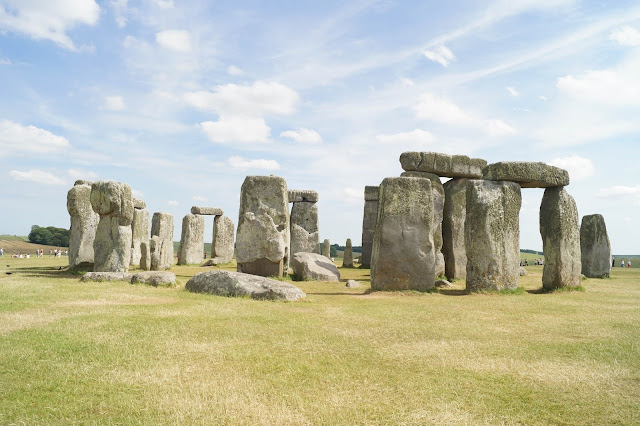 Our supper that evening was a deconstructed chicken pot pie.  It was gravy with chunks of chicken in it served with mashed potatoes, large pieces of carrots, peas and a puff pastry piece on top.  I cut my carrots up into more manageable pieces and stirred it and the peas into the chicken gravy.  Yum!  I could have licked the plate (but I didn't!) 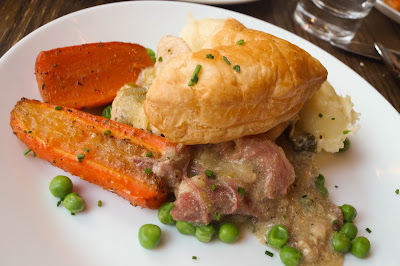 This is the bridge most of us are familiar with from London but it is not London Bridge.  It is Tower Bridge.  It was painted red white and blue in 1977 to celebrate the Queen's Silver Jubilee.  I had no idea it was any color other than stone! 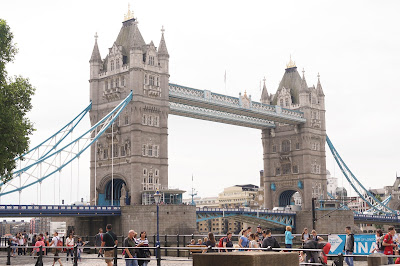 Our view of the Tower Bridge was from the Tower of London.  We met many Beefeaters there who guided us through and answered questions. 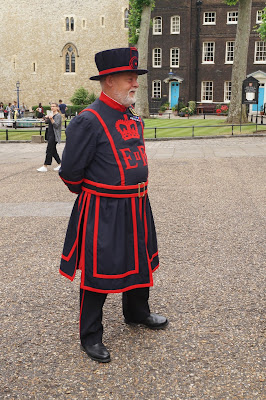 For lunch my fellow travelers and I were on the look out for some local foods again. We asked around and Goodman's Field looked like the place to find what we needed.  A girl in our group ordered Bangers and Mash . She gave me a couple bites. I really enjoyed it. 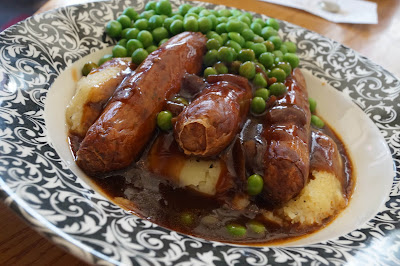 I ordered the Ploughman's plate.  It had a Melton Mowbray pork pie which the waitress said was like pulled pork in a pastry.  No, not really. It is roughly chopped pork and pork gelatin in a pastry crust. It is served cold.  It was good, just not what I expected.  Along with the pie was cured ham, apple, a piece of bread and Davidstow cheddar cheese.  That's the white slab there that looks like a stick of butter.  It was a nice meal and fun to try something a little different. 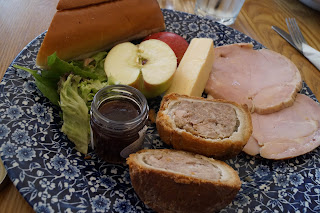 Every once in a while we'd see an old fashioned double decker bus go by so I nabbed a quick photo. 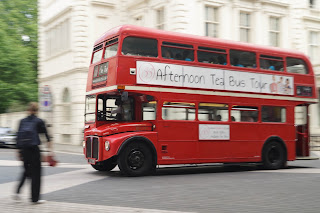 After a trip to a museum and getting separated from the small group I was in we were able to find each other and head to our final supper at an Indian restaurant.  Oh boy, not sure what I am in for as I have never had Indian food before.  We were served naan bread (I could eat that all day since I am a carboholic!) basmati rice, saag aloo, chicken curry, papadan (crispy shells) and mango chutney. The dish I imagined to be hot wasn't the red one it was the green one.  I am not sure Indian food is my thing but I'd try it again sometime. 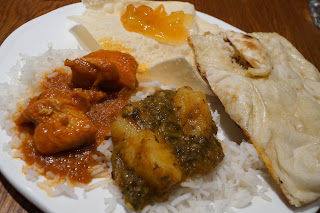 It's the last day and we are headed home.  I grab a shortbread with caramel and chocolate at the airport.  So yummy!  The flight home was long,  our movie programs were broken in our section which made it seem even longer.  A minorly rough descent into Detroit that made me sick and horrible jet lag when I got back home.  The experience was great but it may be a little bit of time before I grab a plane again. 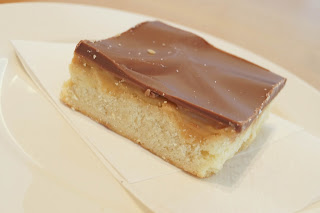 These are just a "few" of the tasty morsels  I brought home to share.  Stroopwafels, Kinder Eggs, Nutella, chocolate bars in many flavors, Black Forest gummy bears, madeleines, cappuccino Twix, macarons, doppelkeks, gummy Smurfs, Kinder bars (like eggs but in bandy bar form,) Biscoffs and bretzeli (like pizzelles but in mini form.) 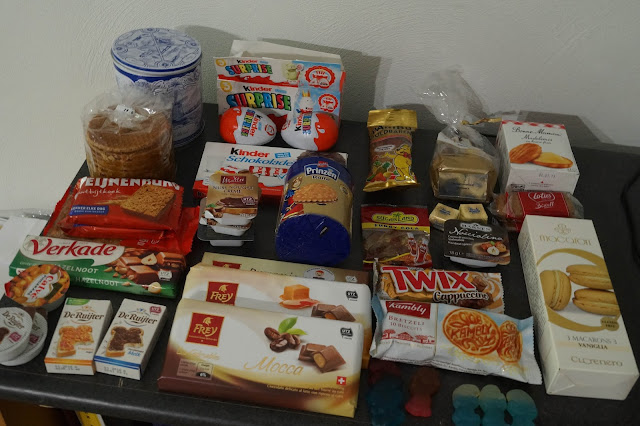 If you didn't catch Part 1, Part 2, Part 3 or Part 4 or need a refresher click on their links to read all about them.  I hope you enjoyed learning about my fun trip around Europe this past summer!!
at 9:41 AM